I have once again made the trek downriver to get more supplies, and to let you know that we are still alive. We are not all well at the moment, because of a hard flu and fever that is going around that knocks you out for about a week, but we trust that the Lord will take care of in His time.

We had an exciting time the day before I came down river, when we got the well completed and the pump set, and were able to turn the crank to bring up water. I will have more on that next month, and also photos to show the excitement. I did get a photo with my phone of the well, that I brought along down that I will share now.  I praise God for being with us as we delt with all the difficulties of getting it done. It turned out pretty nice. 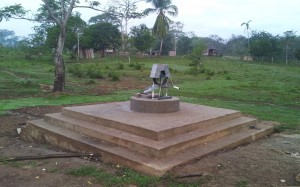 It has been a very busy month for us, as we got our field ready for and planted our rice. I really have no desire to raise rice and beans the way they do, but it has become obvious to us that we will need to do it their way to be better accepted into their culture. Also if we didn’t, then if we ever wanted to present a better way, they would likely not accept it, because we don’t know where we are coming from. So we did plant about an acre and a half, but the real work comes when it’s harvest time.

For several month now, the Lord has been leading us toward having a medical clinic/ hospital here, with a few rooms for people who need to stay a few days for observation. We knew this would take an enormous amount of resources and a trained person to take care of it, so we just started praying that He would somehow provide a place and a doctor or nurse to run it.

Recently the village elders approached us about a building and land that they would like to give our ministry, if we would consider having it as a medical clinic. This is a direct confirmation to what the Lord has laid on our heart, since we hadn’t talked to them about it.

Now we are just waiting on the Lord to call a doctor or nurse by His Holy Spirit, to come and serve in the clinic. There are also many costs involved in getting the building ready and supplying medicine for it, but we know that the one who called us to it does not have a shortage of resources.

We are all very excited about this opportunity, to be able to extend a helping hand to this whole region, and hope you will pray with us.

We also are working on a fence for a garden spot that we are hoping to get planted before the heavy rains that start in a week or two. And, we got us a big pile of sand and gravel brought in before it all gets covered by the water. I will let one of the kids tell the story of how we get sand here, another time.

Thank you all so much for continuing to pray for us, the people of our village, and the Miskitu Indian people. This is our time to learn their language and culture, while we show them the love of Christ. Then later after we have gained their respect, we will also be able to tell them why Jesus did what He did. We appreciate all of you. Eli Lee

I will include an account that Sarah wrote about one of our neighbors.

From our house, if you walk a little ways across the field and through a little creek, in a small group of trees you will find a tiny little house, very weather beaten, and some of the floor almost falling thru.

We had been to the small house before, to take them a little something when we would give all our neighbors a small gift. But it wasn’t until recently now that we can speak the language better that we found out that this is the home of a young widow and her four children. Around the first of the year her husband died from a long term illness. Being a widow here is no small deal, with the fact that most of the food they eat they raise themselves, causing a very hard life for a young mother with no man to provide for her.

Alma (the widow) as a young child was a victim of the civil war in the 80’s.  Her father was killed when she was very young, so she never remembers of meeting him. Due to the war her mother, a widow herself, fled to Honduras for safety with her five children. Life was no easy one for her there, and due to war and hard times she never got a chance to go to school to learn to read and write.

With her husband having been sick for a few years and unable to work, times had been very slim for them for a while already.

“Now that my husband has died,” she told me fighting back her tears, “my little girl will never remember her father. I go to work in the fields everyday so that my family can have food to eat. Sometimes I am so tired that I just can’t go anymore, and I stay home and sleep all day. Those days my children don’t always have enough to eat,” she said, her voice softening a little. “We tried to plant closer so we wouldn’t have to go so far, but the pigs and cows got into the field and ate all our crops. I have no husband to help me now, and sometimes I feel like people forget that I’m here”.

She wants her children to be able to go to school, but her oldest son goes only about half of the time, because when there are people who need help in the fields, he will often go help too, to help bring in more food for the family.

One afternoon as I sat on her porch steps visiting with her she asked me if we have nails for metal. I told her we did. When she heard we did she hung her head down and stammered around for a little, then asked if we would give her four. She was very humbled to have to ask for something. Her roof leaked badly and with the rainy season only a few days off she asked if she could have FOUR nails, so that they would have a dry spot to sleep. She had two new pieces of metal but no way to fasten them.

Later that afternoon Dad, Chris and I went up to her little house with a screw gun and a box of screws. Tearing the old metal off and putting the new metal on ended up being a little complicated, due to the fact that her rafters were so rotten that if we would have stepped on them they would have come crashing down. On her porch floor as well, we had to be careful where we stepped so as not to fall thru.

After getting the new metal on we took the old pieces of metal and put it on the other parts of the roof where it leaked badly. Her roof still leaks, but at least now her family will have a place to go to keep dry when the rains come.

My heart ached that night as went to bed. How could I have it so easy, both my parents still living, plenty of food, a nice home, everything I could ever want. Yet many times I am so ungrateful.

And here this poor widow, who fights everyday just to provide enough food to eat, who’s house is nearly falling down, you will rarely ever find complaining.   Sarah Lee 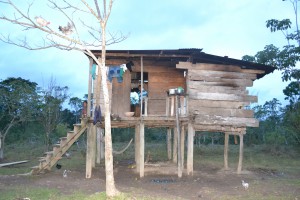 We are hoping to start a program to help build or repair the homes of widows and the chronically poor real soon to help people like this.