Greeting in Jesus holy name. I hope this letter finds you all well and of good health.

We are all doing well here. Chris has recovered well from his sickness and spends his days working at the rice huller.

The rice huller is up and running. Chris is working there full time along with a few of the local men, teaching them how to manage and run it. We hope that in a week or so they will be running it by themselves. The rice huller saves the women much daily hard work. Before, they shelled enough rice by hand for two or three meals a day. This is not easy work! This will not only save the ladies much hard work but it also helps build the economy. With two men working full time it puts more money in the community. 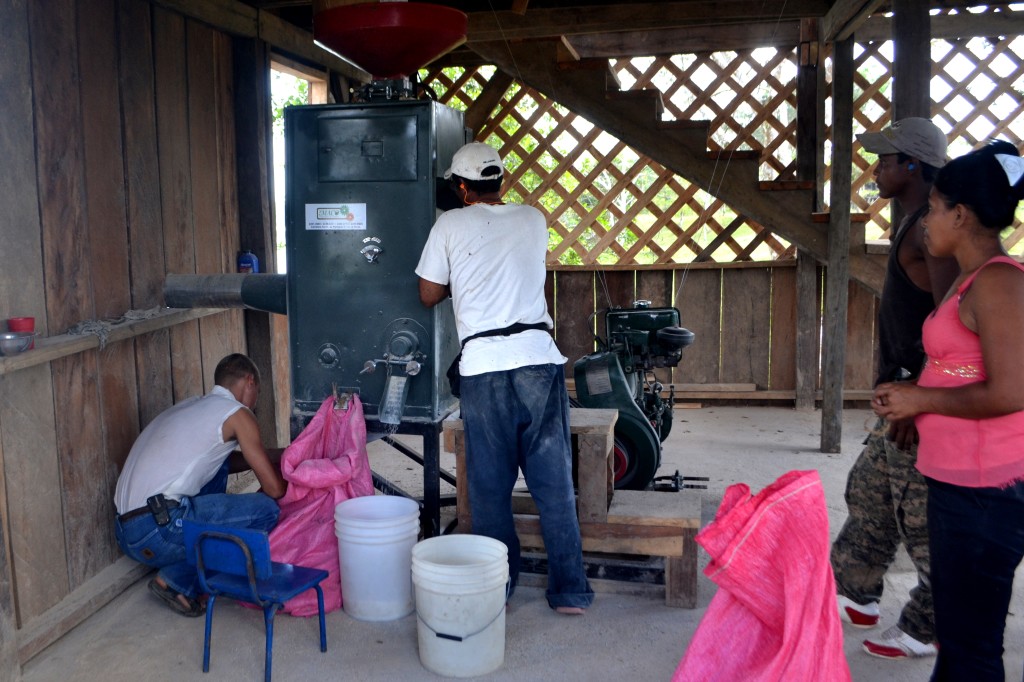 It has been really amazing to see the economy grow over the last year. There are many ways I see it all the time. For example, at first when we would go to the river to do laundry there were very few people that even had soap to wash their clothes. But now you find few people at the river with no soap. Salt is another thing that was hard to find in people’s homes a year ago, but no longer so. I also find it very fascinating how when we pay someone to do some work for us, it will go from hand to hand and many times we will receive the same bill back from Solomon when he sends for stuff for his small store.

We have been working with Solomon, one of the locals here, to get his Venta (small store) up and running. It has been amazing to see the little store quickly move from a tiny bedroom into a new lean-to on the house. I have had the privilege of spending many hours there helping him set up after Dad brought up a new load of stuff. Helping him put prices on that will still be affordable for the people, yet where he will still also be able to run his business. There are constantly people coming to buy a pound of sugar or a packet of spices, and even occasionally someone will save up enough money to buy a cooking pot or plate.  It has also made our work so much easier, not having to put so many hours in seeing after the needs of the people. Being able to teach someone from here and then send the people over there has taken a huge load off my shoulders. 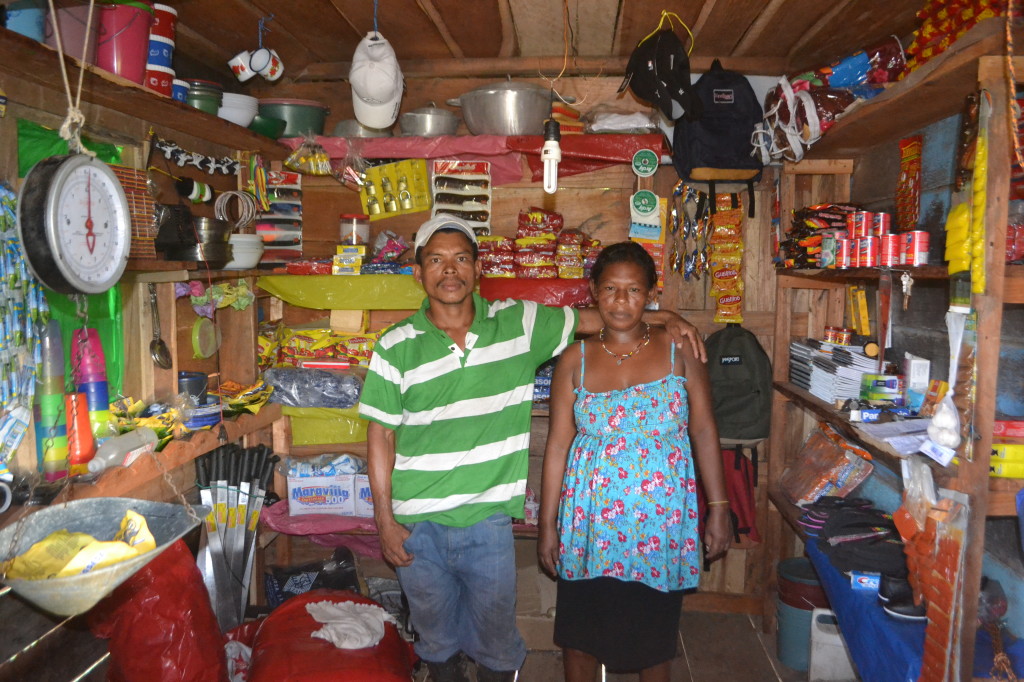 This past month we have had people carry sand for making blocks for the construction of the children’s home. At this point we have over 3000 buckets of sand here. Getting it here is also no easy work. Taking a dugout canoe up the river a little ways, loading it full of sand, then carrying every bucket up the river bank and down to the house. One bucket of sand isn’t even quite 50 cents, yet they nearly fight for a chance to work that hard for a little bit of money. We plan on starting to make more blocks, and moving forward with the children’s home as soon as Dad comes back upriver. 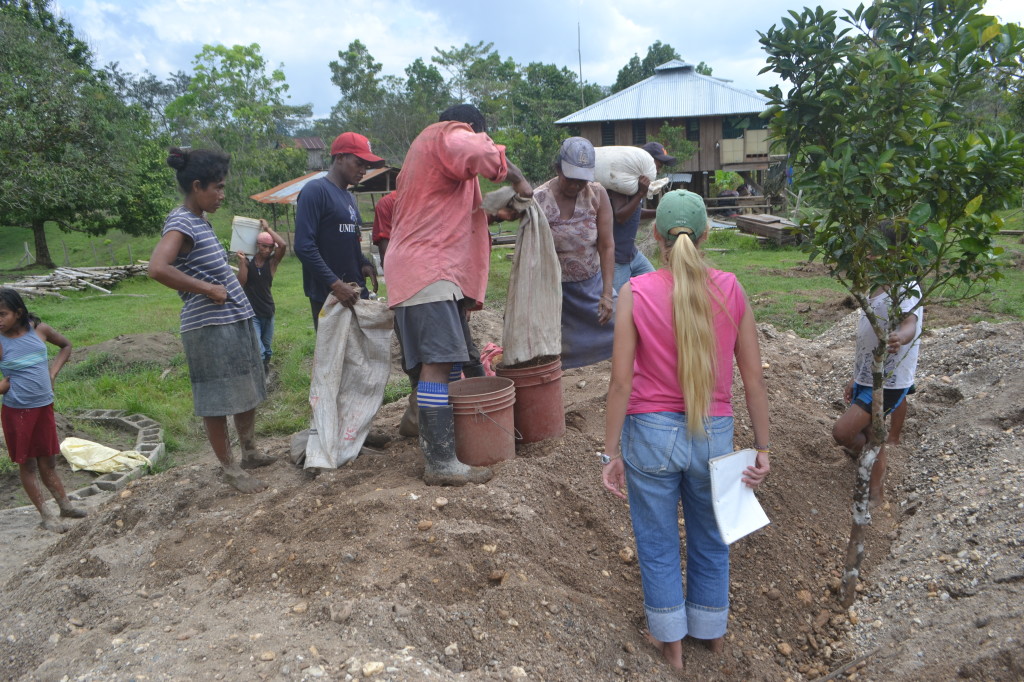 The dry season has started, drying up some of the mud but also causing the river to go down. With the river down Dad will be pulling our boat out of the water this trip and be back to traveling with the slow boats until the rainy season starts again in July.

Hopefully this trip down river Dad will be able to have all the board members and the lawyer sign the papers so we can get them turned in to the government to get our ministry registered. When this is all done it will be a huge blessing. We have been blessed greatly with great local ministries to work with VERBO MINISTRIES (Bilwi) and CENTRO DE FE EZPERANZA Y AMOR (Managua), but we pray the Lord will work it out to where we can be registered with the government soon.

Since January we have been blessed with many friends who have come here to share in God’s work with our family.  It has been a blessing and an encouragement for the people here and for our family.

The first of the year my brother and sister-inlaw came to visit. Having not seen them for over a year it was a great time even if it was only for a few days.

After they left, the Long family, along with a missionary friend working in Honduras, and a young Christian girl from Managua came. During their time here they blessed us by doing small construction projects around the house, as well as teaching soap classes, playing with the kids, and just encouraging our family. 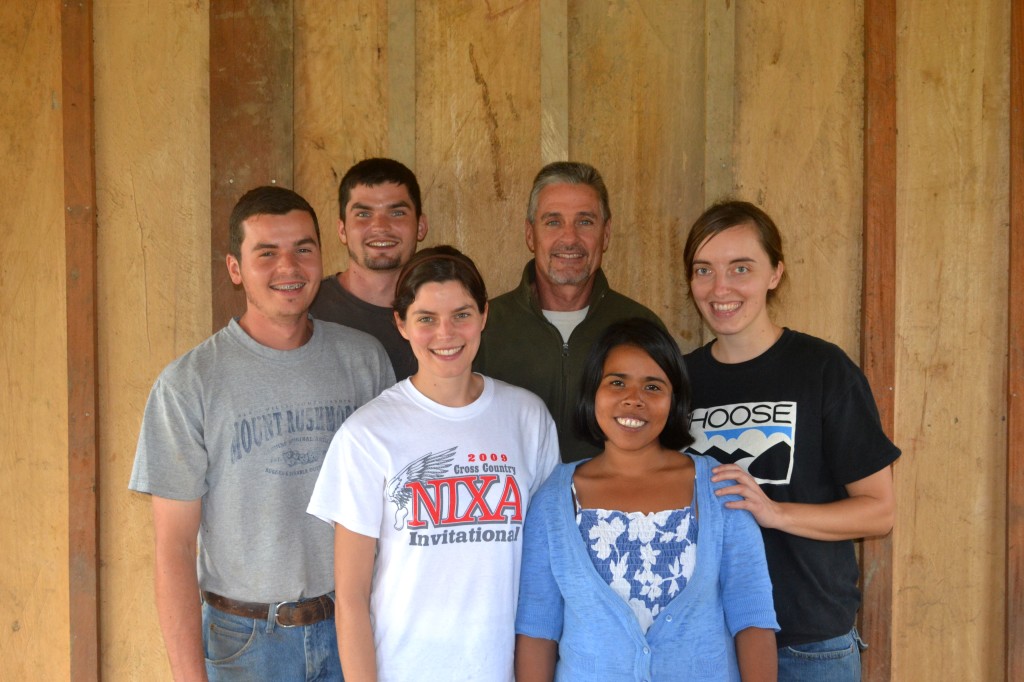 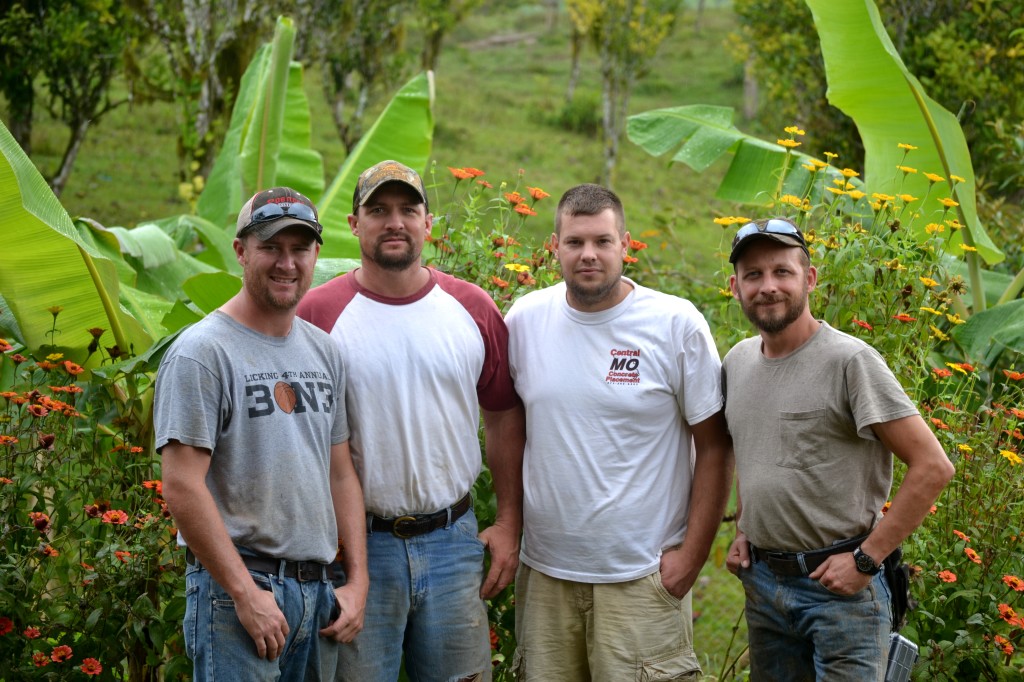 Next a group of five came from our church. This team was able to distribute a gift box to every family in the village, donated by a group from the states. Each box was filled with many different necessities. The appreciation of the people is amazing for me to see. They just can’t stop talking about how much the people that donated this must have a great love for God, because it would take each person about three years to buy this amount of stuff if they worked really hard.  There was also a nurse along who was able to help administer emergency medical care to an injured young man. 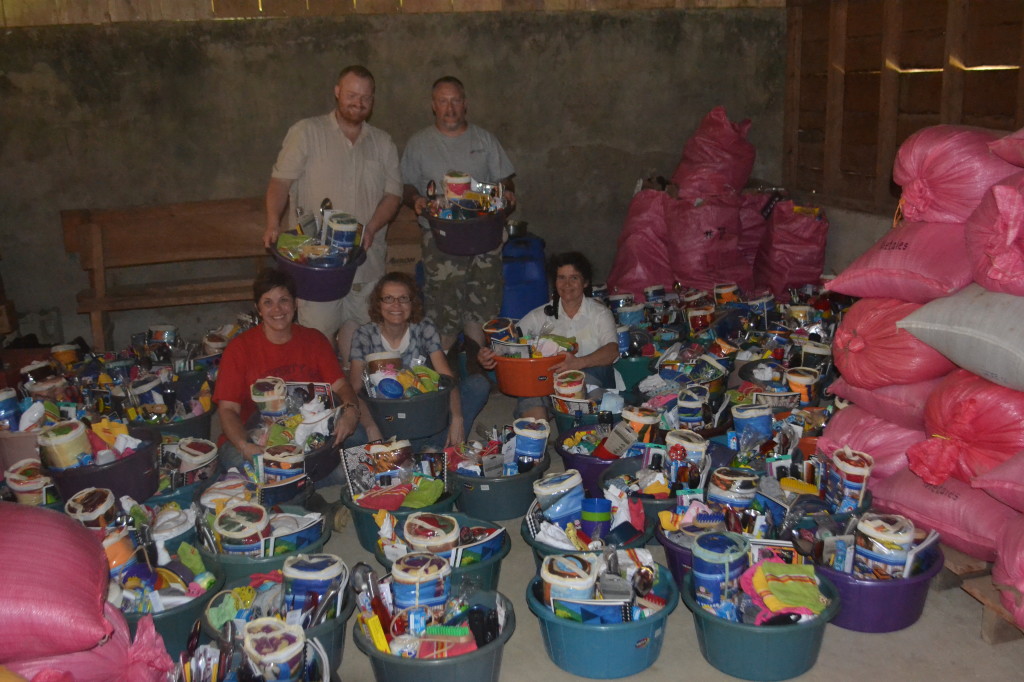 A few weeks later two doctor friends of ours came and blessed every pregnant women in the community with an ultrasound and prenatal care. As well as provided more education for Mary and Eva. 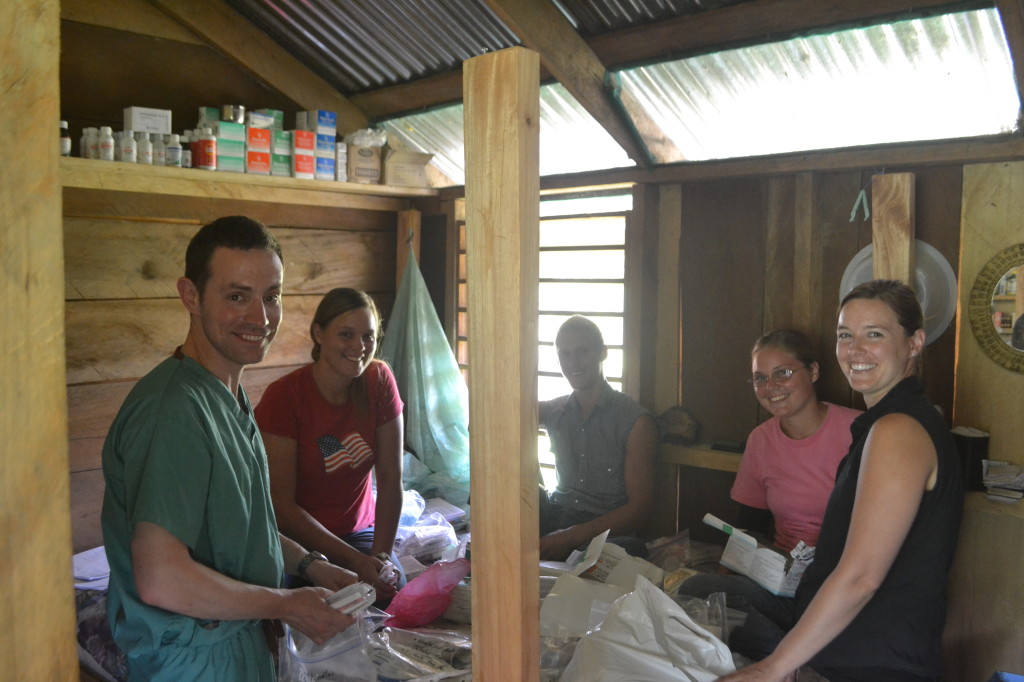 Everyone was unique in their own way and blessed many different people. We were blessed with great groups willing to adapt to whatever was set in front of them.

Medical has increased more than ever. Many days Mary and Eva are both busy full time handing out medicine and tending to the sick. Many more are coming from villages up and down the river, sometimes more than fifty in one day. With the medical increase, we are having a problem keeping enough medicines for the demand with the funds we have. It is hard to say no to a mother with a sick baby, but recently this has been the case frequently due to low funds.

The papers for the clinic building are still in process. The exiting news is a group from the States has already told us that they want to raise money and then come fix the clinic up. It is sometimes hard for me to grasp how the Lord provides and sends people even from places you never expected.

As far as the farming project it has sorta taken the back burner due to lack of time and also because of the neighborhood pigs. But we are hoping to find time to start working on that again.

Everybody plays an important role in keeping things running here. Chris is full time busy working on this and that, Eva and Mary on medical, Dad just never has time to sit down much, and my time is consumed in the business side of the ministry. But many times the ones that run the house and keep things flowing smoothly seem to go unnoticed, But I must say Mom, Katie, Lizzie and John play a big part of this ministry, Cooking three meals a day for fifteen plus people. Mornings and lunch we feed and care for many children and many times adults will spend evenings here. Cooking, cleaning the house, and doing chores is a full time job. They make what us others do, possible.

Devotions every morning are my favorite part of the day. It is the time of the day when after breakfast our whole family sits around and reads a chapter out of the bible then we have discussion time afterward. It has been amazing how our family has formed here. There are the four children who we care for, and this month four more as their parents went down river to the hospital to have a new baby. And then Orly a young man who was searching and began coming over mornings for devotions, and now has been saved. The widow Alma’s son has taken Dad to be his father figure and now comes over for Devotions. And recently another young man seeing the change that Orly has made decided he wants to know more about this, and now has also started coming here every morning for Devotions. Devotions are very unique, because we read in three different languages. English, Spanish, and Miskitu. English for the family, Spanish because some of the young men understand the Spanish bible better, and Miskitu because that is the native tongue and the language the children understand. It is also fun and interesting when teams are here with us. 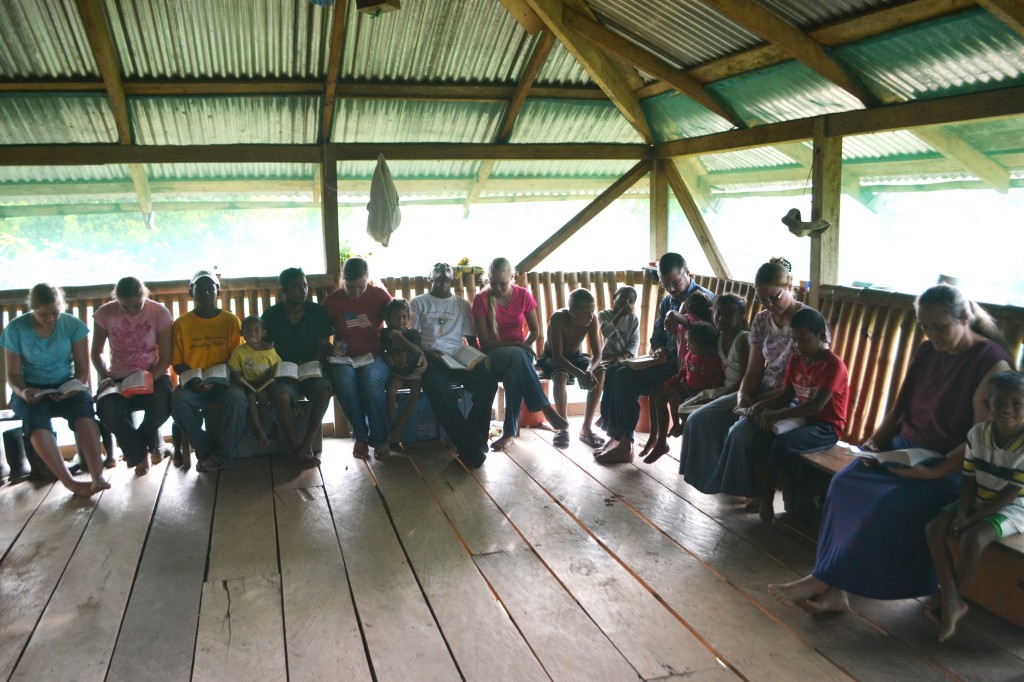 There is so much work to be done here. The Lord is moving in mighty ways. Pray that we can continue to be his hands and feet.

With much Love, In Christ,

3 thoughts on “Update from Sarah”