Praise be to our Great God and Father! I am again humbled at the thought of having the privilege to serve such a loving Master, that is all powerful and all knowing, yet has such a great interest in having an intimate relationship with such weak and miserable humans. He is so patient with us as He teaches us, even if we don’t “get it” right away.

We really enjoyed our time in the States in the month of June, but were so ready to come back home. Thank yall for making us feel welcome and loved, and for all the prayers, support, and items you gave us. The progress of the work here depends on it.

These two weeks back here have been quite a challenge. The spiritual war has broke out in full force. Many of our readers may think this story is “off the wall” or “far fetched,” but please let me share it with you anyway, because I too had no idea how powerful and how real evil spirits are until I moved into an area that has been the enemy’s territory for hundreds or thousands of years, so please bear with me while I try to explain the best I can find words for.

Another young girl from our village fell victim to a witch doctors curse, and because she is living alone with here grandma who is a widow, we got involved in helping take care of her. It took us no time at all to figure out that every time the witch doctors came in to do their medicine on her, she would get a fresh round of attacks. So we talked to the grandma about it, and she knew it too, but paying them to come do their stuff on the girl was the only thing she knew to do for her beloved grand daughter.

But she too had noticed that when we come and prayed for the girl she would get better. I explained to her that every time she invites those guys in, she in inviting the demons back in too, so she decided to not allow them in any more and see if what I said was true. It didn’t take long for her to see that there was truth in it, but man did she ever get her ears filled by most of the people in the village about it. She was told over and over that there is no way that the child would ever be healed by just praying for her, but that she had to also use the “Miskito” medicine.

So at that point we knew that our God had to come through, and that this was going to be a witness to all. We prayed and prayed for the girl, and as the evil spirits left her she would get better, but there was one that just wouldn’t leave. And every time we started talking to her about God and the Holy Spirit, the demon would throw her into another fit, which would last any where from an hour to twelve hours. Plus the witches would still come and sit on her porch and cause her to have a fit.

So for days and nights we would fight with her, tying her hands and feet and holding her down as the demons took control of her body and tried their best to kill her. At first before we were there to help she twice jumped into the river trying to get away from them, and almost drowned. It took three grown people to hold the 14 year old down, to keep her from doing things like tearing out her hair, slamming her head or her body to the floor repeatedly, choking herself, chewing the meat off of her arms, breaking her fingers off, and anything else that would inflict serious pain to the body.

It became obvious that we had to do something else, so we decided to fast as well as pray, because there were days that the darkness was so heavy that it seemed like our prayers didn’t go anywhere. One day as I was crying out and pleading with God to hear our prayers, he showed me a vision, where I saw KrinKrin covered with this thick black cloud, then I saw a bright light in heaven and coming from that light was a big army of angels heading our way, slashing through the darkness with their swords much like one would cut a path through the jungle. They worked their way down to KrinKrin, and as they touched the ground there was an instant rush of bright light that blasted through the tunnel they had cut, and mushroomed over the village like a canopy. So we were encouraged to keep going.

At that point the witch doctors were laughing and making fun of the grandma and us. We finally had to confront one of the witches who came and sat on the porch about what they are doing, and what Gods word says about it, at which point she left extremely angry, determined to do us even more harm. After three days and three nights of fasting and praying Help finally showed up, which was yesterday, and that strong one had to leave her body.

At that point we were able to teach her what was going on, and how every time the demons come back to attack her she can pray to God for help and in the name of Jesus tell them they can’t come any closer, and have to go away. We were also able to talk to her about being willing to give her life to Christ and ask Him to put the Holy Spirit into her heart, at which point the demons cannot enter into her again. She is now learning to pray when the demons try to get her, and has not had any get into her since, even though they have tried a few times.

We have learned that this curse was put onto her mother when she was thirteen by one of the head voodoo people of the river area, and for fifteen years they paid every witch doctor they could find to try to make here better but they couldn’t, because it was one of the master demons. So a witch finally made a deal with the demons, that if they would leave her, they could have her daughter, which is Solma, the girl we have been praying for. So that’s why nobody stayed around to help her, because they knew there was no hope for her.

Would you please pray for Solma that she would be able to have complete victory over all the demons, as she continues to process what we are teaching her about God and salvation. And that she would be able to understand the gospel and be saved. Please also pray for Petrona, the grandmother, that God would continue to draw her to Himself and strengthen her faith as she learns more about salvation, so she too may be saved in her old age.

Thank you for praying for us, so that we can hold out through the difficult times, to be loving even when we have to confront witches face to face. And please help us worship our great God for coming through on time. We love yall bunches! Eli and Leah Lee and family

Ps. (Thursday morning) Glory to God!!! Chris just called on the radio and said that Solma has given her life to Christ and her heart to be the home of the Holy Spirit, and has been healed. Hallelujah!!! Thank you Jesus!! As she was having trouble again last night with the spirits coming to get her, she cried out from the depth of her heart to Jesus to save her. And at that moment is when the miracle happened. She started saying, they are running away, look, they are running away! Then she looked up and saw Jesus coming to her. He came and untied the curses that she was tied up with and set her free!

I can’t wait to get back and sit down with her and listen to her testimony! God is so good!! Thank yall so much for praying! 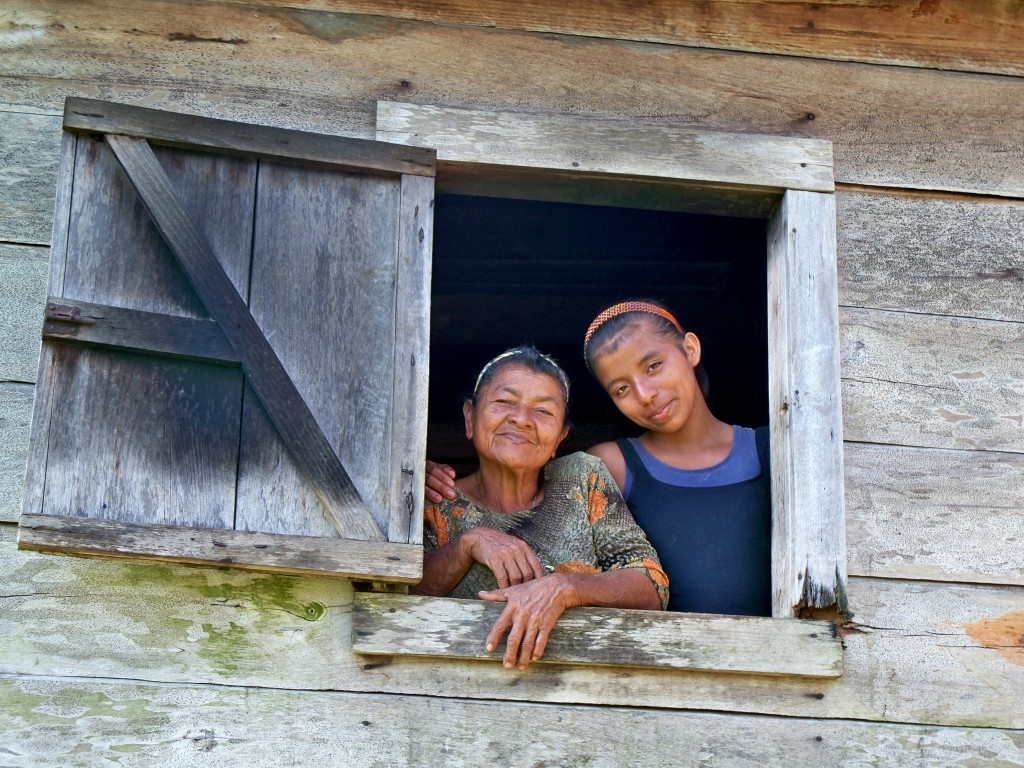 Solma and her grandmother Petrona