The plan developed on September 22 upon a visit from Nutie and a young American girl named Hannah. And then after a month of planning and preparing, the plan sprang into action on October 21 and was completed on October 22. 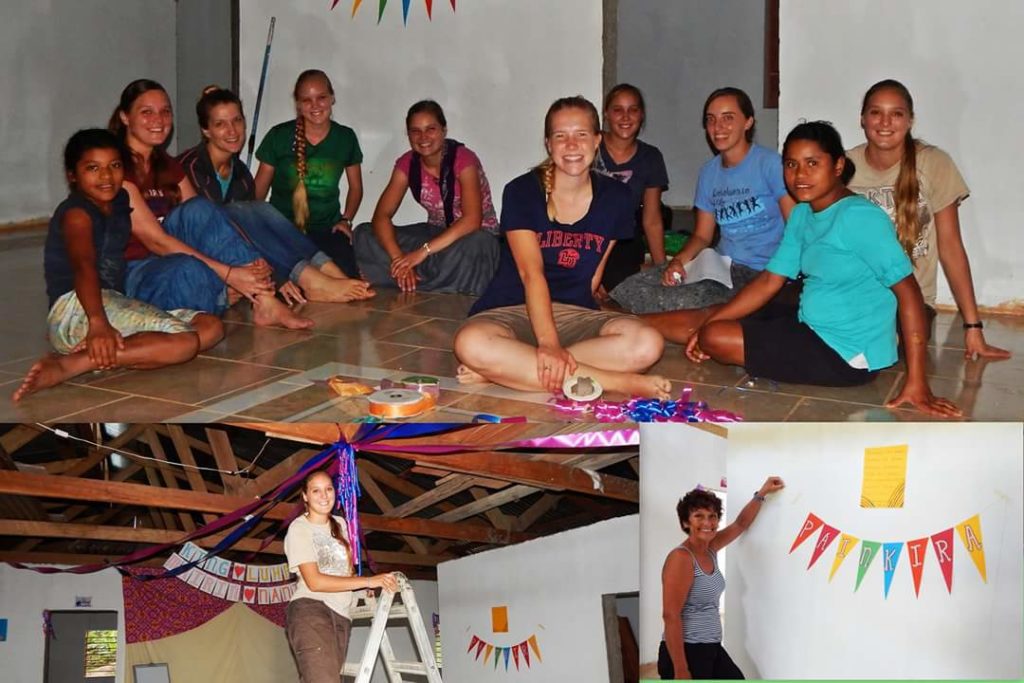 By 12:00pm on Friday the whole building sparkled, and the girls started to arrive. Each was assigned to her own group with two leaders. “Attendance 38,”we were totally amazed! That was more than we had expected, leaving only five girls in KrinKrin from ages 12-18 who didn’t attend. God was going to do amazing things! The plot from the boys to make sure all the girls who attended would become demon possessed wasn’t going to work either, because God had already placed protection around every door and window to keep out any bad intentions. He had strengthened the faith of the weak, and we hoped for the best (or so we thought). 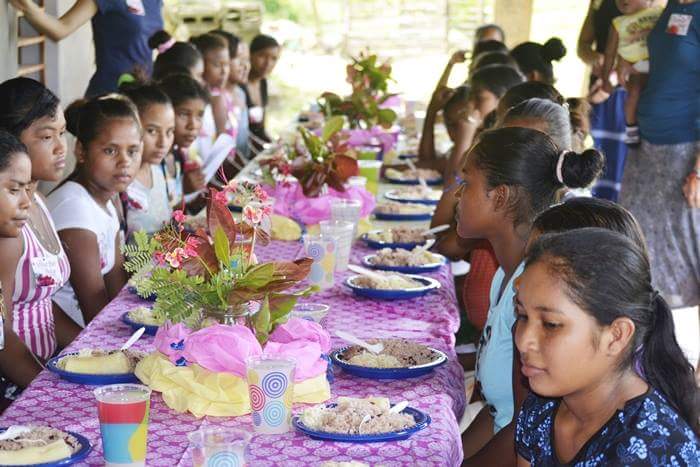 Lunch was served at a long table, which is not common practice for the Miskito people, but ended out a huge hit. After the meal and introductions, Eva started off the teachings with Martha and Mary, which lead to awesome group discussions on how to hear from and listen to God. Volleyball and more teachings, and the “Daughters of the King” conference was off to a good start. After Hannah shared about finding our identity in Christ, we all headed to God’s great big flooded bath tub for a bath. (I’m not sure if it made us cleaner or dirtier, but that isn’t what counts.) As I walked back from the river, I was in awe of how all the girls so willingly followed instructions. This was not normal! 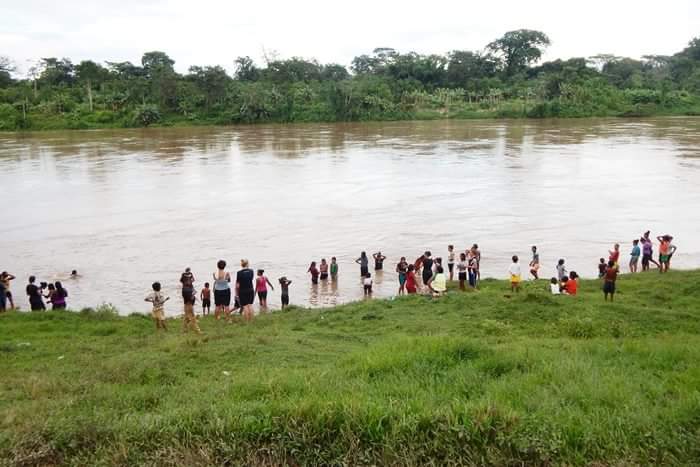 I was still almost in shock at the girls’ behavior as I followed them into the large concrete building. Mom rushed out of the building, broom in hand and sweat dripping from her brow, “I almost didn’t make it before ya’ll came back.” What would we do without the ones who worked behind the scenes? Dad spent hours in prayer fighting the spiritual battle, teaching, and sharing bits of wisdom. Chris, John, and Wesley Copper worked for hours helping prepare. Lights needed to be hung, benches carried, lawn mowed, volleyball net set up, cinnamon rolls baked, and a house to manage on their own, besides the other work they were trying to juggle. Their selfless service was a blessing to witness.

After braiding fifteen heads of black hair and every stomach filled, Camille and Charisa graced us with their testimonies of God’s desire to work in our lives. Each was unique and left the girls with lots of material to think about. This was followed by a teaching from Mary on foot washing, and an opportunity to wash each of the girls’ feet. “Shouldn’t we be the ones washing your feet?” asked Estevana after I motioned for her to be seated. This opened up doors for great discussion and helped them see us come down to their level. 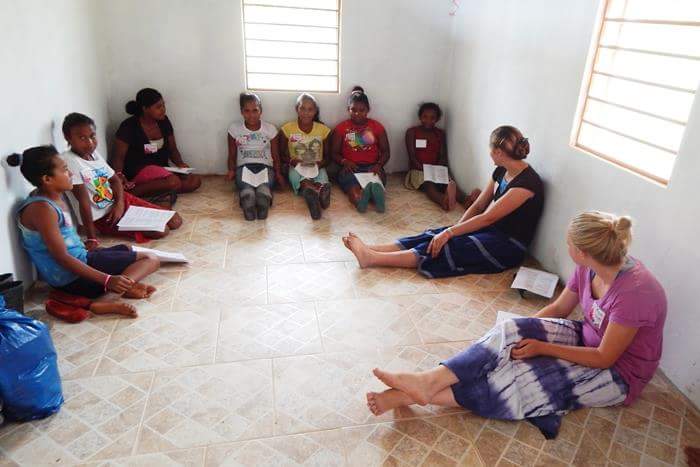 Shrieks of delight, almost as though they had forgotten their troubles for a moment, rang through the building as each girl joined into the games. They didn’t have to worry, or think about the guys outside trying their best to take this moment away from them. Dad and Chris walked the property lines to make sure they couldn’t get in as they had already tried a few times, but ultimately God stood watch over the place, and no one could steal this moment from these precious young girls. “It’s almost like I’m in a different world,” one girl stated. God’s presence could be easily felt, and that is what freed the girls to just be girls for two days in their life.

A little nail polish rounded things up, and at 11:30 lights were out and blankets spread on the tile floor for a little rest.

Five o’clock AM and the building sprang to life again anticipating the day’s events.

Individual and group pictures started off the day, followed by coffee and the most delicious cinnamon rolls, made by Wesley Cooper.

Eighteen year-old Macia stood waiting for her turn to have her picture taken, when all of a sudden the mean voice of her father called across the village. He shouted that she was a bad mother and all kinds of other nasty words because her baby had been fussy during the night. Humiliation flooded Macia’s face. “I just want to go home,” Macia said, wiping at the tears in her eyes. “I talked with my dad yesterday and he said it would be fine if I come. If he would have come and talked to me I would have been more than happy to go feed my baby, but now he has humiliated me in front of the whole village. This isn’t the first time he’s done it either. My heart is broken over and over again because I try and talk with my dad but he only speaks harsh words to me.” Macia now cried freely as we sat under the guava tree waiting for her niece to bring the baby to be breast-fed.

Macia’s father Pantin is a drunk and a man of many harsh words. My heart shattered at the thought of what Macia went through daily without the love of her father and without understanding the love of her Heavenly Father. I had planned on teaching that day about the love of a true father, my Heavenly Father. God allowed me to see that morning a glimpse of how real the need of love from the Only True Father was. As I stood up to speak, God put words in my mouth. My dad stood up next to share God’s heart for His daughters. God’s Spirit powerfully moved and many hearts were touched. Seeds were planted that we pray will grow to bear fruit. 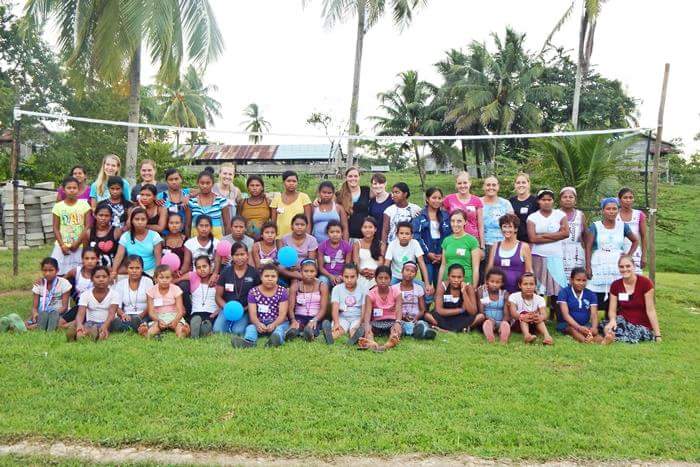 After Dad and I taught, we did a scavenger hunt. My heart lept for joy as Palina, a seventeen-year-old girl, a mother of two and another soon to be born, began to laugh and run around like a little girl. Palina is a woman who has experienced much abuse since birth. She is the wife of a forty-year-old man who treats her like a slave, but sadly she doesn’t know any different. She rarely smiles, so to hear her happy squeals was a moment of pure joy for me. 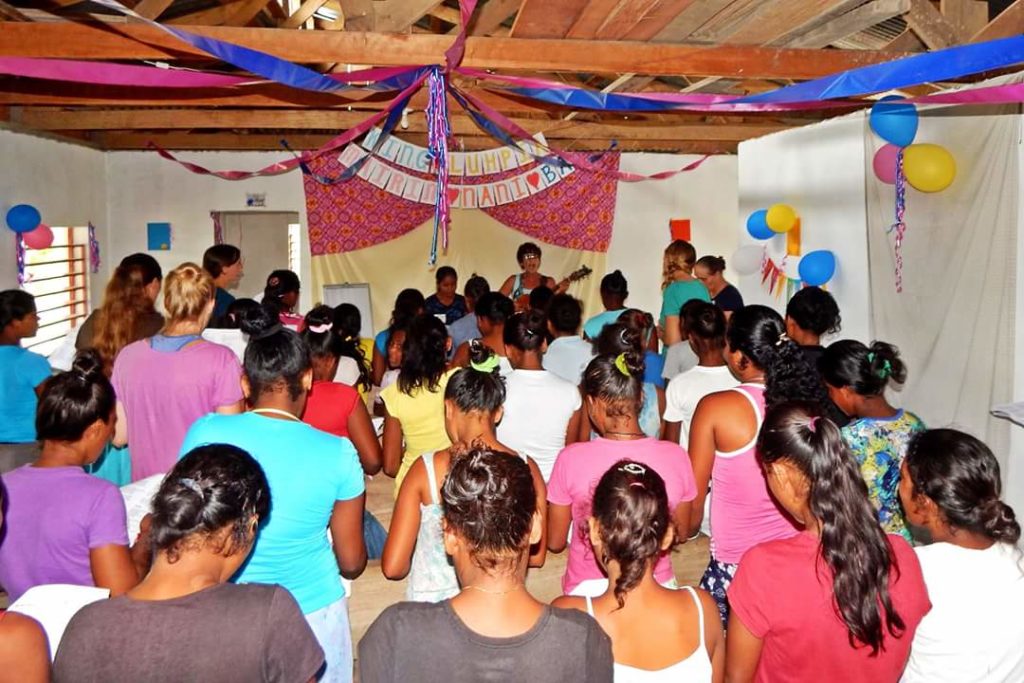 Karen brought a message about what daughters of the King should look like, which many of the girls recounted as something that really touched their hearts.

After lunch the girls enjoyed beads and crafts, followed by an ending message by Nutie. Each group leader than presented her girls with a small gift to go with them, and all of a sudden it was all over. Clothes were packed and the girls each went to their own homes.

That was it! That was the end of the girl’s conference. But we believe it is only the beginning. The beginning of many hearts and lives changed. This conference was only the door to opening many new opportunities to share with these precious souls. By Sarah Lee

Some names have been changed in this story for the protection of persons.