Grace and Peace to you from our Lord Jesus Christ. Through whom all blessings come, and through whom we can have eternal life. Recently as I was thinking about many of you and praying for yall, I realized that most of the time we write about the trouble that we face and the trouble the people here face each day, which I know that you want to know. But as I thought about all the things that God has done and is doing here, I had a desire to express our gratefulness to yall who diligently pray for the work here, and who give of your resources to help with the work.

Since we are here; (a year and a half) seven souls have been saved and sealed by the Holy Spirit, hundreds of people now have access to clean drinking water, more than 10,000 prepared meals have been served to the hungry, thousands have received medical treatment who otherwise had no access to it, through our grain buying and processing coop, food is now much more affordable in the area, plus so many other things that if I were to try to name them all, I couldn’t.

And hundreds of people are constantly looking at us and seeing what the gospel looks like as we strive to live our lives as the living gospel to the ones who can’t read or understand the bible. They are seeing that God really does come through for the ones who put all their hope in Him. God is slowly but surly making the line more and more visible between the ones who are truly interested in Him and the ones who practice sorcery and pretend to be Gods people.

I am convinced that God has a beautiful plan for the village of KrinKrin and the Rio Coco area, and I am so honored and humbled that God would allow us to be a part of this glorious plan to bring many many people into His eternal Kingdom. You too are a part of this plan, and I pray you are as blessed as we are by the fact that God has called you to such a worthy calling. Thank you so much for being faithful! Here is a story that Sarah wrote about what God has been doing this last week. Be blessed brothers and sisters! Eli Lee

It was Thursday afternoon as I sat in the office entering paper work into the computer. “Hey what’s up”, I asked Mary as she came in with her boots on.

Letting out a long sigh Mary let me in on the latest news.  “Derling (10 years old) is sick with demon possession, but she wants us to come and pray for her, and take her bible for her so she can read God’s word.

From little child up I had heard and read about people being demon possessed and how Jesus had heeled them, but had never gave that much thought to it till we came here.

Being here for a year and a half now I have learned a lot about demon possession, how it begins, how it affects the possessed person, and how the witch doctors turn around an heal that person. This particular possession in this story I’m about to tell mostly affects young girls. In general it starts when someone gets mad at someone else and wants to get back at them. Sometimes they will do it to the person they are mad at or a family member. They will get something personal (preferably a hair) of the person they want to cast the spell on, take it to the witch doctor and pay him to cast a spell on that person.

Many of you have heard the story of Solma and how she was healed and set free. In that story there was a little girl that didn’t get mentioned. Derling was there with us as we fought with and prayed for Solma, Derling cleaned house, carried water, washed laundry, etc. Even though Derling wasn’t involved in praying for Solma and fighting with the demons, she saw the power of God when Solma was freed from the chains that held her.

A few weeks after Solma was healed Derling came to us and asked if she could come to our bible study we have every morning, so she could learn more about God. We were very happy and of course said yes. From then on she came from time to time always happy to learn.

Derling’s Parents are some of the leaders of the Catholic Church, but also in time of trouble or sickness they are one of the first ones to run to the witch doctors for help.

So when we got the news that Derling wants us to go pray for her we were concerned that the parents would stand up and say yes, yes pray for her but we also want to do these medicines on her.

As Mary, Eva and I prepared to go over to their house we prayed that the lord would help us to explain clearly that they either have to choose God’s healing or Satan’s medicines.

You cannot drink the cup of the Lord and the cup of demons too; you cannot have a part in both the Lord’s Table and the table of demons. 1cor 10:21

When we got there we learned that Derling had told her parents that she does not want Satan’s medicines done on her, she believes that God is the one that is going to heal her. Thankfully the parents honored her wishes but also as we spoke to them more they began to understand more clearly.

‘Derling do you believe that God will heal you’ I asked her as she lay there awake. ‘Yes I believe’. As I began teaching her from the bible the Demon threw her body into convolutions so she could not learn about God’s word. She began crying as her body convulsed, she begged the evil spirit to leave her alone. She began naming the three names of the people that had cast the spell on her, ‘I had no part in the fight she cried, I am innocent, why do you torture me this way; there is a man up above that sees what is going on, He sees that I am only an innocent child, someday You will have to stand before him and give an account of what you have done’.

A month before Derling’s older sister and another young women had a fight two days in a row. When it was taken in front of the judge, he said for their punishment each of the girls have to dig a ditch by the school house for water drainage. Derling’s sister was out there digging the next day. The opposite party refused for a long time, but Wednesday evening as I went to get water from the well she was out digging the ditch. But she wasn’t out there alone, one of the witch doctor was there too, talking with her. And so this young woman and her mother paid the witch doctor to cast this spell on their enemy’s younger sister.

Thursday and Friday we prayed as well as taught her about salvation, although most times when we began speaking about God’s word the bad spirit in her would throw her body into convolutions, run for the door in inhuman speed, or the demon would push itself up into her throat to suffocate her. We fought with the demon so it would not kill her body. We prayed that the Lord would make the spirits leave her alone. Friday evening late we came home from praying and began talking about why the spirit wouldn’t leave her alone.

And Jesus replied to them, this kind cannot be driven out by anything but prayer and fasting. Mark 9:29

We knew the Lord was going to heal Derling so when we remembered this verse we began fasting.

Saturday night God gave Karen (A Christian woman living with us) a vision showing her that the parents had sins in their life that was hindering Derling from being healed.

Sunday evening we all went over to their house again to pray. Karen shared with the parents the vision God had showed her. Both parents repented before God and made a confession of faith that evening. Then we prayed and asked God to cleanse the house, and as we worshiped God, His Spirit was so obvious in that house. We all gathered around Derling to pray. We cast out the demons in Jesus name, they could no longer stay there. When the demons left her she went into a deep sleep, her body being exhausted from wrestling with the demons. We hoped she would wake up so we could teach her more so she could understand how to receive God’s salvation. But she slept on into the night as we worshiped the Lord in prayer and song. Late at night we came home rejoicing that the Lord wasn’t only working in Derling’s life but also in the lives of her parents. The demons had been forced to leave Derling alone; yes she still didn’t have God’s spirit, but we trusted she would become saved.

“When an impure spirit comes out of a person, it goes through arid places seeking rest and does not find it. Then it says, ‘I will return to the house I left.’ When it arrives it finds the house unoccupied, swept clean and put in order. Then it goes and takes with it seven other spirits more wicked than itself, and they go in and live there. And the final condition of the person is worse than the first.” Matt 12:43-45

After the demons had caused Derling’s body to go into convolutions for the second time, and after she regained consciousness, she knelt down and prayed this simple prayer. “Lord thank you so much for making the bad spirits leave me one time, but I’m asking you God, please do it again”. God honored her prayer.

All day we spent teaching her more about salvation; and in the evening we all gathered around again for a time of prayer. Dad announced that we will all gather around Derling and whoever wants to pray is free to, also telling Derling she can pray if she wants. As we were still gathering she got on her knees not waiting for anyone else, and prayed this beautiful prayer, “ Lord I know I have done bad things in my life, but God I’m asking you to forgive me, and from this day on I don’t want to do them again. God I’m giving you my heart. God I ask you to put your holy spirit in my heart so I can live for you. Thank you God! Amen

We are rejoicing with the angels in heaven for these that have come home. 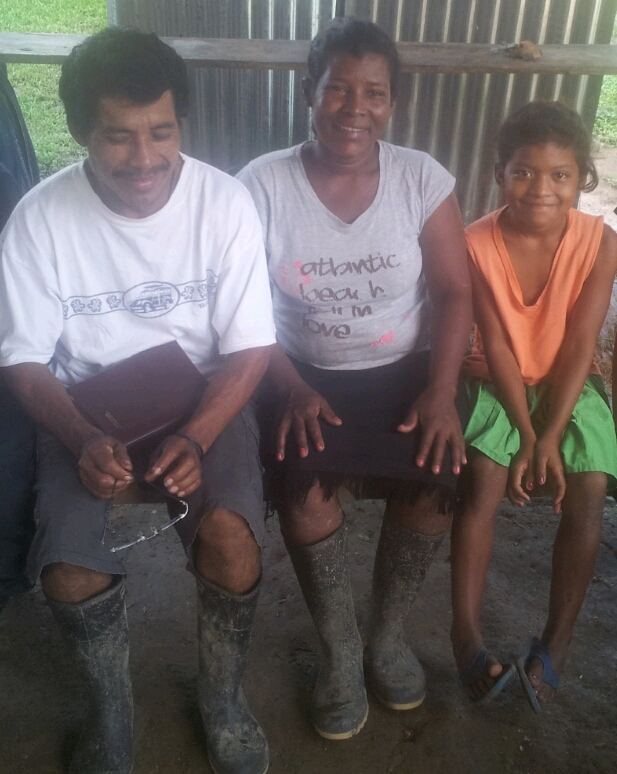 Friends and Neighbors, there is huge spiritual battles going on here. This was Satan’s territory and he doesn’t want to give it up. He is fighting back with all the strength he has. Recently three of the main witch doctors from this community, who had for years lived in other towns, came back to live in this community. That is only in the physical that we see, we know Satan wants to gather all the farces he has to fight back. But I also know that God is much stronger then Satan and God will win. It doesn’t mean it will be easy, but we trust that in the end God will have huge victory. Please be continuing to pray. Thank you, Sarah Lee